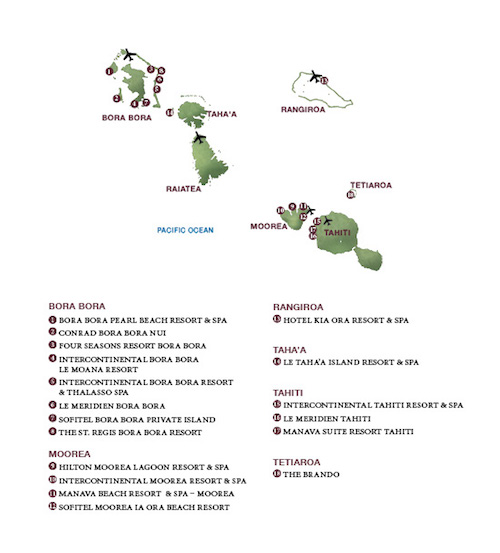 THE ISLANDS OF TAHITI
Tahiti covers over two million square miles of the South Pacific Ocean and is comprised of 118 islands spread over five great archipelagos. Many islands are crowned with jagged peaks while others appear to barely float above the breaking waves. Embrace the warmth of your Polynesian hosts whose love for their islands is seen through music, dance, and flowers. Tahiti offers Overwater Bungalows, Polynesian Spas, snorkeling, diving, cruising and is one of the world's most desirable honeymoon destinations.

BORA BORA
With a lagoon resembling an artist's palette of blues and greens, is love at first sight. Honeymooners and romantics from around the world have laid claim to this island where the castle-like Mount Otemanu pierces the sky. Lush tropical slopes and valleys blossom with hibiscus while palm-covered motus circle the lagoon like a delicate necklace. Perfect white-sand beaches give way to emerald waters where impossibly colored fish animate the coral gardens. Simply said, the most beautiful island in the world.

MOOREA
Soaring magically out of the ocean in an explosion of green velvet, is what you would imagine a South Seas island to be. A wide, shallow lagoon surrounds the island's mountains, peaceful meadows and cool waterfalls. Steep fields of pineapples and vanilla will fill your senses and renew your belief in the majesty of nature. Pastel-painted houses, surrounded by gardens of hyacinth and birds of paradise, circle the island in a fantasy of happy, yet simple, architecture.

RANGORIA
A string of coral encircling a luminous turquoise and jade-green lagoon, appears from the air to be a pearl necklace laid upon the water. More than 200 tiny motus wind along the fragile reef. Inside, infinite schools of marine life fill the iridescent waters of the world's second largest atoll.

TAHA'A
With the rich aroma of vanilla lingering heavily in the air, Taha'a offers a glimpse of the traditional, tranquil life of the Tahitians. Here, the coral reef surrounding the flower-shaped island is crowned with as many as 60 tiny, idyllic motus perched above the north shore.

TETIAROA
Best known as Marlon Brando's private island, is a retreat fit for royalty. Once considered a playground for the wealthy, this atoll served as a summer residence for the former chiefs and kings of Tahiti. After many years of being inaccessible to the general public, a new eco-friendly, ultra-luxurious resort, The Brando, has changed that.

THE ISLAND OF TAHITI
Often called the Queen of the Pacific, is appropriately crowned by a circle of majestic peaks. The island's mountainous interior shelters deep valleys, clear streams, high waterfalls and mysterious caves, all bathed in the green iridescence of Mother Nature's light. The wide, flat coastal lands, edged with a rugged coastline, are home to both fields of tropical flowers and most of the island's population. Papeete, meaning "water basket," was once a gathering place where Tahitians came to fill their calabashes with fresh water. Now the invigorating capital city and gateway of the territory, Papeete boasts vibrant markets, fine restaurants, pearl shops, clubs and boutiques.